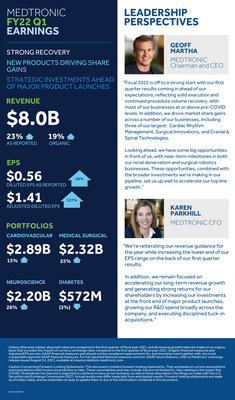 The company reported first quarter worldwide revenue of $7.987 billion, an increase of 23% as reported and 19% on an organic basis, which excludes the $245 million benefit of foreign currency translation. Revenue growth rates have not been adjusted for the negative impact of the extra selling week in the first quarter of last fiscal year. The company's first quarter results reflect a strong recovery from the impact of the COVID-19 pandemic on elective procedures that the company experienced in 2020. Unless otherwise stated, all revenue growth rates in this press release are stated on an organic basis, which excludes the impact of foreign currency translation.

"Fiscal 2022 is off to a strong start with our first quarter results coming in ahead of our expectations, reflecting solid execution and continued procedure volume recovery, with most of our businesses at or above pre-COVID levels," said Geoff Martha, Medtronic chairman and chief executive officer. "In addition, we drove market share gains across a number of our businesses, including three of our largest:  Cardiac Rhythm Management, Surgical Innovations, and Cranial & Spinal Technologies. Looking ahead, we have some big opportunities in front of us, with near-term milestones in both our renal denervation and surgical robotics businesses. These opportunities, combined with the broader investments we're making in our pipeline, set us up well to accelerate our top line growth."

Diabetes
Diabetes first quarter revenue of $572 million increased 2% as reported and declined 3% organic. Diabetes quarterly revenue performance was driven by high-single digit growth in durable pumps, including strong growth in international markets on the continued launch of the MiniMed™ 780G system. This was offset by mid-teens declines in U.S. sales of consumables and continuous glucose monitoring (CGM) products.

Guidance
The company today reiterated its revenue growth guidance and raised the lower end of its EPS guidance range for fiscal year 2022.

"We're reiterating our revenue guidance for the year while increasing the lower end of our EPS range on the back of our first quarter results," said Karen Parkhill, Medtronic chief financial officer. "We remain focused on accelerating our long-term revenue growth and generating strong returns for our shareholders. In addition to growing our dividend, we are increasing our investments at the front end of major product launches, growing our R&D spend broadly across the company, and executing disciplined tuck-in acquisitions."

Medtronic plans to report its fiscal year 2022 second, third, and fourth quarter results on November 23, 2021, February 22, 2022, and May 26, 2022, respectively. Confirmation and additional details will be provided closer to the specific event.

About Medtronic
Medtronic plc (www.medtronic.com), headquartered in Dublin, Ireland, is among the world's largest medical technology, services and solutions companies – alleviating pain, restoring health and extending life for millions of people around the world. Medtronic employs more than 90,000 people worldwide, serving physicians, hospitals and patients in more than 150 countries. The company is focused on collaborating with stakeholders around the world to take healthcare Further, Together.

FORWARD LOOKING STATEMENTS
This press release contains forward-looking statements within the meaning of the Private Securities Litigation Reform Act of 1995, which are subject to risks and uncertainties, including risks related to competitive factors, difficulties and delays inherent in the development, manufacturing, marketing and sale of medical products, government regulation and general economic conditions and other risks and uncertainties described in the company's periodic reports on file with the U.S. Securities and Exchange Commission including the most recent Annual Report on Form 10-K of the company, as filed with the U.S. Securities and Exchange Commission. In some cases, you can identify these statements by forward-looking words or expressions, such as "anticipate," "believe," "could," "estimate," "expect," "forecast," "intend," "looking ahead," "may," "plan," "possible," "potential," "project," "should," "going to," "will," and similar words or expressions, the negative or plural of such words or expressions and other comparable terminology. Actual results may differ materially from anticipated results. Medtronic does not undertake to update its forward-looking statements or any of the information contained in this press release, including to reflect future events or circumstances.

Medtronic calculates forward-looking non-GAAP financial measures based on internal forecasts that omit certain amounts that would be included in GAAP financial measures. For instance, forward-looking organic revenue growth guidance excludes the impact of foreign currency fluctuations, as well as significant acquisitions or divestitures. Forward-looking diluted non-GAAP EPS guidance also excludes other potential charges or gains that would be recorded as Non-GAAP Adjustments to earnings during the fiscal year. Medtronic does not attempt to provide reconciliations of forward-looking non-GAAP EPS guidance to projected GAAP EPS guidance because the combined impact and timing of recognition of these potential charges or gains is inherently uncertain and difficult to predict and is unavailable without unreasonable efforts. In addition, the company believes such reconciliations would imply a degree of precision and certainty that could be confusing to investors. Such items could have a substantial impact on GAAP measures of financial performance. 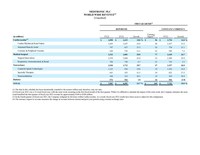