The company reported fourth quarter worldwide revenue of $8.089 billion, a decrease of 1% as reported and an increase of 1% on an organic basis, which excludes the $215 million negative impact of foreign currency translation. The company's fourth quarter revenue results were affected by temporary issues related to global supply chain, particularly in Surgical Innovations, and China, due to recent COVID-19 lockdowns.

"Global supply chain and COVID-19 controls in China created acute impacts to our results in the fourth quarter. We understand the root causes, we're addressing them, and we expect them to resolve over the near-term," said Geoff Martha, Medtronic chairman and chief executive officer. "We remain keenly focused on delivering innovation-driven growth with a robust pipeline of technologies in fast-growing markets, and we're committed to creating strong shareholder value through strategic capital allocation and active portfolio management."

The company expects organic revenue growth in its fiscal year 2023 in the range of 4% to 5%. If recent foreign currency exchange rates hold, fiscal year 2023 revenue would be negatively affected by approximately $1.0 billion to $1.1 billion.

The company expects fiscal year 2023 non-GAAP EPS in the range of $5.53 to $5.65, including an estimated 20 to 25 cent negative impact from foreign currency translation based on recent foreign currency exchange rates.

"We expect recent and upcoming product launches to make a difference across our businesses this coming fiscal year," said Karen Parkhill, Medtronic chief financial officer. "Supply chain, inflation, and foreign exchange are expected to create near-term pressure. Yet, we remain focused on driving our R&D investments to accelerate our growth and create large, long-term returns for our shareholders."

Dividend Increase
The company today announced that effective May 25, 2022, the Medtronic board of directors approved an increase in Medtronic's cash dividend for the first quarter of fiscal year 2023, raising the quarterly amount to $0.68 per ordinary share. This would translate into an annual amount of $2.72 per ordinary share, an 8% increase from the prior $2.52. Medtronic has a long history of dividend growth, and the company is a constituent of the S&P 500 Dividend Aristocrats index. Today's announcement marks the 45th consecutive year of an increase in the dividend payment. Including today's increase, Medtronic's dividend per share has grown by 48% over the past 5 years and has grown at a 16% compounded annual growth rate over the past 45 years.

Medtronic has a strong track record of returning capital to its shareholders, including $5.5 billion in fiscal year 2022. The company remains committed to returning a minimum of 50 percent of its free cash flow to shareholders, primarily through dividends, and to a lesser extent, share repurchases. The dividend is payable on July 15, 2022, to shareholders of record at the close of business on June 24, 2022.

"Our substantial dividend increase reflects the confidence of our Board of Directors and executive management in Medtronic's financial strength and future earnings power," said Martha. "We've increased our dividend for the past 45 years and growing our dividend is an important component of the total return we generate for our shareholders."

New Kidney Health Technology Company
As part of its portfolio management strategy, Medtronic announced today together with DaVita the intent to form a new, independent kidney care-focused medical device company. Medtronic will contribute its Renal Care Solutions (RCS) business to the new company, which will focus on developing a broad suite of novel kidney care products and solutions, including future home-based products, to make different dialysis treatments more accessible to patients. Additional details on the agreement are available in the joint press release issued today by Medtronic and DaVita, and in the Form 8-K that Medtronic filed today with the U.S. Securities and Exchange Commission.

Medtronic plans to report its fiscal year 2023 first, second, third, and fourth quarter results on Tuesday, August 23, 2022, November 22, 2022, February 21, 2023, and Thursday, May 25, 2023, respectively. Confirmation and additional details will be provided closer to the specific event.

Financial Schedules
The fourth quarter financial schedules and non-GAAP reconciliations can be viewed by clicking on the Investor Events link at investorrelations.medtronic.com. To view a printable PDF of the financial schedules and non-GAAP reconciliations, click here. To view the fourth quarter and fiscal year 2022 earnings presentation, click here.

About Medtronic
Bold thinking. Bolder actions. We are Medtronic. Medtronic plc, headquartered in Dublin, Ireland, is the leading global healthcare technology company that boldly attacks the most challenging health problems facing humanity by searching out and finding solutions. Our Mission — to alleviate pain, restore health, and extend life — unites a global team of 90,000+ passionate people across 150 countries. Our technologies and therapies treat 70 health conditions and include cardiac devices, surgical robotics, insulin pumps, surgical tools, patient monitoring systems, and more. Powered by our diverse knowledge, insatiable curiosity, and desire to help all those who need it, we deliver innovative technologies that transform the lives of two people every second, every hour, every day. Expect more from us as we empower insight-driven care, experiences that put people first, and better outcomes for our world. In everything we do, we are engineering the extraordinary. For more information on Medtronic (NYSE:MDT), visit www.Medtronic.com and follow @Medtronic on Twitter and LinkedIn.

FORWARD LOOKING STATEMENTS
This press release contains forward-looking statements within the meaning of the Private Securities Litigation Reform Act of 1995, which are subject to risks and uncertainties, including risks related to competitive factors, difficulties and delays inherent in the development, manufacturing, marketing and sale of medical products, government regulation and general economic conditions and other risks and uncertainties described in the company's periodic reports on file with the U.S. Securities and Exchange Commission including the most recent Annual Report on Form 10-K of the company, as filed with the U.S. Securities and Exchange Commission. In some cases, you can identify these statements by forward-looking words or expressions, such as "anticipate," "believe," "could," "estimate," "expect," "forecast," "intend," "looking ahead," "may," "plan," "possible," "potential," "project," "should," "going to," "will," and similar words or expressions, the negative or plural of such words or expressions and other comparable terminology. Actual results may differ materially from anticipated results. Medtronic does not undertake to update its forward-looking statements or any of the information contained in this press release, including to reflect future events or circumstances.

Medtronic calculates forward-looking non-GAAP financial measures based on internal forecasts that omit certain amounts that would be included in GAAP financial measures. For instance, forward-looking organic revenue growth guidance excludes the impact of foreign currency fluctuations, as well as significant acquisitions or divestitures. Forward-looking diluted non-GAAP EPS guidance also excludes other potential charges or gains that would be recorded as Non-GAAP Adjustments to earnings during the fiscal year. Medtronic does not attempt to provide reconciliations of forward-looking non-GAAP EPS guidance to projected GAAP EPS guidance because the combined impact and timing of recognition of these potential charges or gains is inherently uncertain and difficult to predict and is unavailable without unreasonable efforts. In addition, the company believes such reconciliations would imply a degree of precision and certainty that could be confusing to investors. Such items could have a substantial impact on GAAP measures of financial performance. 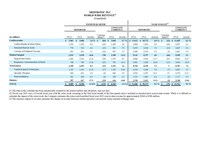